Ssangyong Motor, part of the Mahindra Group, today unveiled the ‘XIV-Air’ and ‘XIV-Adventure’, concept models of the ‘X100’ that SYMC has developed as a next-generation strategic model, at the 2014 Mondial de l’Automobile (2014 Paris Motor Show) along with mass-production vehicles for the EU markets. 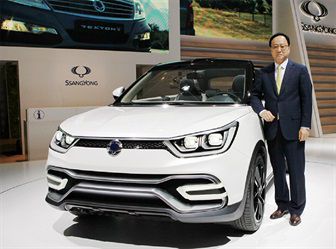 SYMC held a press conference at the 2014 Mondial de l’Automobile press day events, which started today at the Paris Expo, Porte de Versailles and will continue till October 19. At the event, SYMC uncovered the XIV-Air’ and ‘XIV-Adventure’, concept models of the ‘X100’ which is to be launched early next year, attracting interests from local personnel and the media.

“With these two concept models, we want to show high fidelity in design and versatility far beyond the class of ‘X100’ which may beautifully harmonize with either urban areas or outdoor activities”, an official from SYMC said.

Since its debut at the Frankfurt Motor Show in 2011, a total of 6 ‘XIV (eXciting user-Interface Vehicle)’ concept car models have been introduced at the various automotive exhibitions both at home and abroad, showing the company’s product philosophy (Robust, Specialty, Premium) and design philosophy (Nature-born 3Motion) with consistency, and applying innovative concepts such as electric vehicles (e-XIV), soft-top (XIV-2) and various styles to test its potential.

The ‘XIV-Air’ and ‘XIV-Adventure’, are SUVs tailored for customers who possess a distinctive personality, offering activity and practicality under the concept of ‘Journey and Joy’, emphasizing a joyful and rhythmical design based on “Rhythmical Motion”. According to the officer from SYMC, these concept cars allow customers to indirectly experience the innovative style of the ‘X100’ which is scheduled to be launched in early 2015.

‘XIV-Air’ whose design motif is ‘Nature in daily life in urban’ has a trendy and open-style Targa Top structure and simple sideline boasting joyful rhythm. The Targa top structure maximizes the openness of the car, upgrading driving pleasure through the wind.

‘XIV-Adventure’ whose design motif is ‘Excitement and romanticism pursuing relaxation in life’ tries to ensure an escape from routine life and challenges the future. Innovative design factors including a bumper protector and roof carrier show its readiness to start on a journey into nature.

Based on emotional design giving a touch of soft wind, the interior of ‘XIV-Air’ and ‘XIV-Adventure’ maximize the user’s efficiency by linking the user interface to IT technology.

A sporty and modern center fascia featuring the image of a flying wing with two-tone color is integrated with an IT system to realize a future-oriented design concept of the space, and at the same time, the core concept of SYMC’s future technology, ‘3S (Smart-link, Safe-way, Special-sense)-CUBE’ which provides driving pleasure and dramatically improved driving safety.

Thanks to the advanced situation awareness ability, various driving and safety-related functions including ACC (Adaptive Cruise Control), LKA (Lane Keeping Assist), and AEBS (Advanced Emergency Braking System) can be automatically controlled, and meter cluster lighting color and other interior factors can be modified to suit the driver’s taste and the driving conditions.

Taking the 2014 Mondial de l’Automobile as a starting point, SYMC will start global pre-launching activities and diversify the overseas markets by actively raising our presence in Europe.

ESP (Electronic Stability Program) guarantees airtight safety under any circumstances, and systems such as TPMS (Tire Pressure Monitoring System), 7 airbags including knee airbag on the driver’s side, airbag off switch on the front passenger seat, and HAS (Hill Start Assist) allow best-in-class safety.

In the exhibition booth of 530sq.m. at the 2014 Mondial de l’Automobile, SYMC displays the Korando C, Rexton W, Korando Turismo, and Korando Sports, as well as concept cars ‘XIV-Air’ and ‘XIV-Adventure’. SYMC plans to have meetings with its local distributors to devise market strategies for the European SUV market in earnest, where sales are continuously on the rise.

In particular, the European market which is seeing a dramatic increase in sales of small size SUV is gaining importance as the test tube for the ‘X100’. SYMC, the SUV specialist with a 60-year history, will use its time-honored brand value and aggressively improve and expand the local sales network.

Lee Yoo-il, CEO of SYMC, said “Taking the 2014 Mondial de l’Automobile as a starting point, SYMC will start global pre-launching activities and diversify the overseas markets by actively raising our presence in Europe. As ‘X100’ has reached the last stage, SYMC will do its utmost to successfully finalize the project and to continue our growth momentum for 5-years in a row. As such, SYMC will lay the foundation for future profits and growth.”