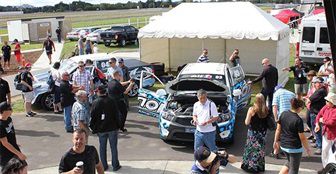 With 4 Actyon Sports racing cars demonstrated for 8 laps, it was the first time to be on display and there will be more exposure at various events before its official racing series kick-off in Taupo on September 7, 2014.

Ssangyong Actyon Racing (SAR) is a three year series that will run as major support to NZ’s motor racing category, the BNT V8 SuperTourers. SAR will be a controlled category, so all 30 racing pick-ups will be exactly the same spec, no variations – so it will come down to driver ability on race day.